You don’t have to take our word for it, see what the critics say!

Played on an interesting multi-level set with effective use of back-projection and sound, this is clever, inventive theatre and well worth a visit.

The Southsea Shakespeare Actors’ choice of the Square Tower for Richard III works a treat.  Played against the stone patchwork of the southern wall it drips with history – appropriate for Shakespeare’s literary assassination of the last Plantagenet king.  Yes, it’s Tudor propaganda of the worst sort – but viewed with a 21st century ethos it plays wonderfully as a black comedy.  And director Rob Bartlett has cast Aaron Holdaway, well-known locally for his comedy roles, as the ill-fated king. If you know Holdaway’s work and expect a prat-falling, eye-rolling Richard – forget it.  Humour is gently prised out, not forced, and Holdaway demonstrates a range that goes well beyond making an audience laugh.  As Richard’ sidekick, Buckingham, Danny Carter is clear and believable. There’s great work from Sue Barltlett (Duchess of York), Lauren Farnhill (Margaret) and Sarah Parnell (Elizabeth) too.

Barlett’s direction makes good, creative use of the space, the sound is sometimes terrifyingly effective and the pace is very good. Some of the smaller character parts are painted with strokes a little too broad for my liking and I’m not convinced the zombie-esque vocal from the spirits of Richard’s dead victims works.  That said, it’s great to see one of Portsmouth’s oldest and finest companies still producing Shakespeare of this quality

IN this fast-paced, colourful and entertaining production of a rarely-performed Shakespeare play, (believed to have been co-written with George Wilkins), we were whisked at brisk pace round the Mediterranean, encountering shipwrecks, tournaments, assassins, pirates, brothels and temples, all stitched together by Andy Thomas’s energetic chorus Gower, and following the exploits of Mike Jupp’s put-upon hero Pericles as he succumbed to storms, bereavement, healing and reconciliation, and more coincidences than one could wish for in a lifetime. His was a sympathetic portrayal of great range and depth.

Amongst many first-class performances, Rob Bartlett (Governor Cleon) and Sarah Parnell (his jealous, scheming wife Dionyza) stood out, along with Tim Suffolk’s kind and wise Cerimon, and Faye Williams as Pericles’ devoted wife Thaisa. As his daughter Marina, Charlotte Thompson brought out the character’s innocence while avoiding her naivety, and Lauren Farnhill, as brothel madam Bawd, was always on the lookout for the main chance.

Chock-full of some of the Bard’s favourite devices – banished nobility, women disguised as men and lovers wandering through forests – and some of his most famous words, the piece is very accessible to non-Shakespeare fans.

With Shakespeare, experience tells and here the elder statesmen of the SSA shine. Nick Downes (Corin), Rob Bartlett (Touchstone), Terry Wiseman (Adam) and Neil Gregory-Reader (Jaques) are all worth the ticket-money, but there’s some good work from those with less experience, too.

Aaron Holdaway and Hazel Aspden as Silvius and Phoebe – along with a particularly pleasing Rebecca Davis as Audrey – fly the flag for the raunchy yokels and – in three very thankless parts – Ben Tanner, David Pearson and Jackson Davies impress.

In the pivotal roles of Orlando, Rosalind and Celia, Andrew De Pury, Amy Barlow and Vicky Martin need to trust the great man’s words more and not physically demonstrate so much of the dialogue to the audience.

This week saw the Southsea Shakespeare Actors expand their repertoire even further with T.S.Eliot’s Murder in the Cathedral, with a production that felt every bit authentic despite some sound and lighting setbacks. The story tells us of the quarrel between Thomas Beckett and King Henry II. Following Beckett’s 7 year absence as a result of the argument, in which time the town of Canterbury are losing hope in God, he returns to the town, encouraged by others to make peace with the King, and is ultimately killed, as a result of deciding otherwise.

Setting it in Portsmouth Cathedral itself was a smart move by director Lauren Farnhill, and placed the minds of the audience right along with the cast, back in the early 12th century. One particular problem when working in such a space is, of course, sound levels, and many lines, particularly near the beginning were lost as a result. Some performers seemed unaffected however, and delivered their performances with particularly good diction and clarity, most notably Vincent Adams, Danny Carter, Neil Gregory-Reader and Rob Bartlett as the First, Second, Third and Fourth Knights. Both Carter and Adams particularly gave a welcome injection of humour in what normally would be a wholly serious piece.

Farnhill’s use of a very strong female ensemble as the women of Canterbury were the particular highlight. Although small roles, each performer gave an individual delivery which stood out on its own merit. Sarah Mayell-Thomas, who also doubled as Second Tempter gave two strong and diverse performances, while Katie Farnhill, Vicky Martin and Gail Oakley were stand outs, each giving passionate well delivered stories to the audience. Nick Downes as Fourth Tempter, again gave a strong delivery showing a particularly good understanding of the text.

Patric Howe as Thomas Beckett, who is more well known for his bold and domineering performances, instead gave a delicacy and sensitive touch. This, contrasted with the brutality of the act committed against him, gave dynamics and a wonderful sense of light and shade.

“The Winter’s Tale is one of Shakespeare’s lesser-known plays and, as such, the cast are under no pressure to do anything other than tell the story.  And The Southsea Shakespeare Actors did just that – with style, creativity, clarity and warmth.
Director Nick Downes had assembled a mighty cast. Andy Thomas and Rob Bartlett as Leontes and Polixenes – kings and friends who fall out in no uncertain terms – are the foundations upon which the plot is built. Thomas conveyed the agonies of jealousy with studied excellence and Bartlett’s betrayed friendship matured credibly into bitterness and anger. The women, here, came off particularly well.
Susie Coutts as the wronged Hermione and Sarah Parnell as the faithful Paulina gave astonishing, controlled performances of strength and integrity – but they had best watch out for up-and-coming Lara Cooper-Chadwick (Perdita) whose performance had gravitas, truth and subtlety far beyond her years. Tim Suffolk and Aaron Holdaway made the notoriously difficult Shakespearean comic roles funny – always worthy of praise! – but the crowning glory of the piece, thanks to inspired direction, was the almost-wordless reconciliation between friends and family at the end of the play.
Beautiful, touching and just plain wonderful the whole thing was just a joy.” 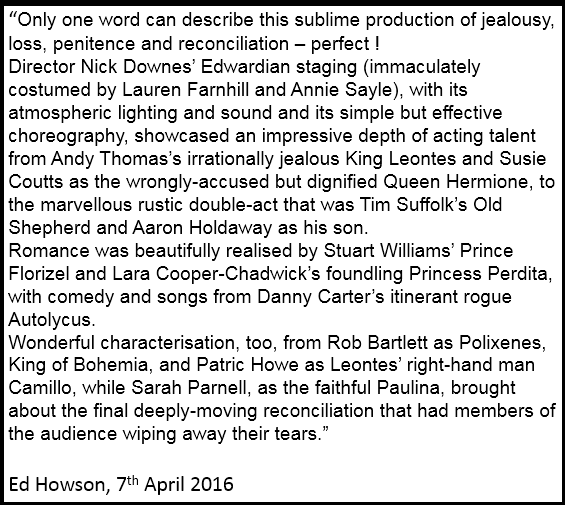 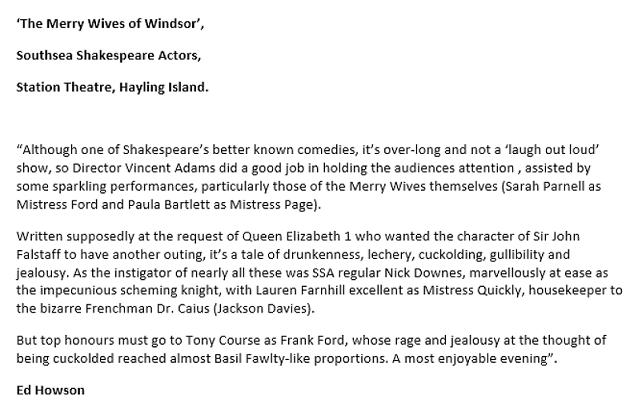 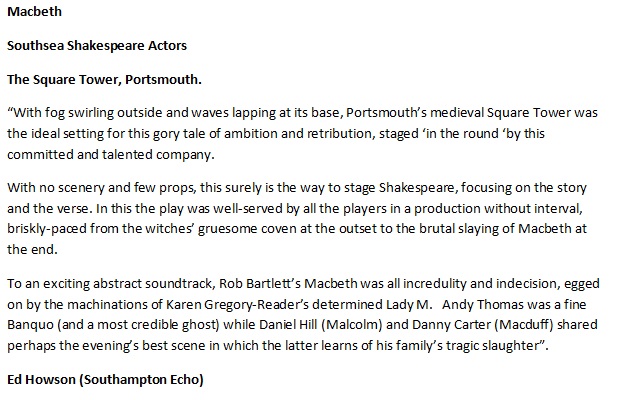 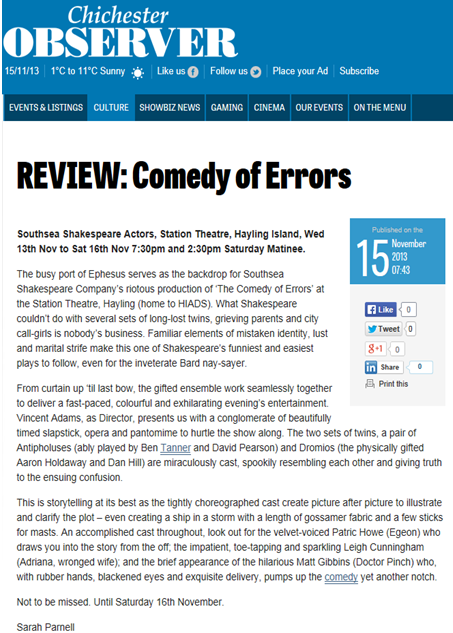 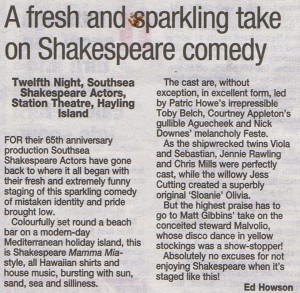 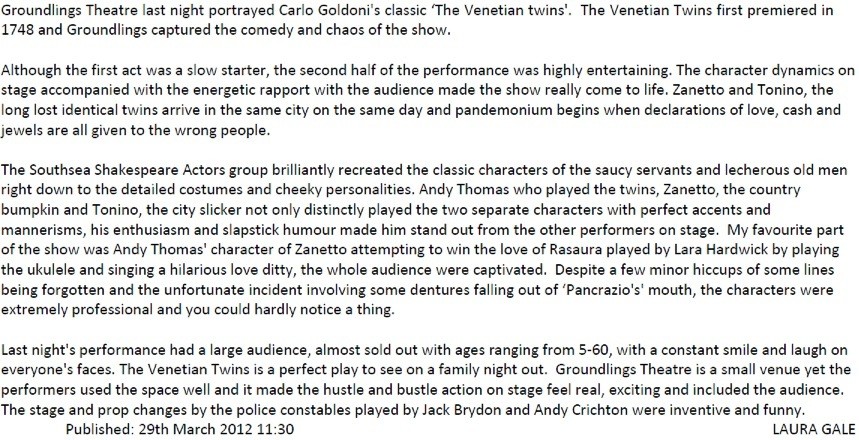 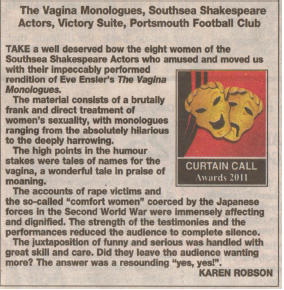 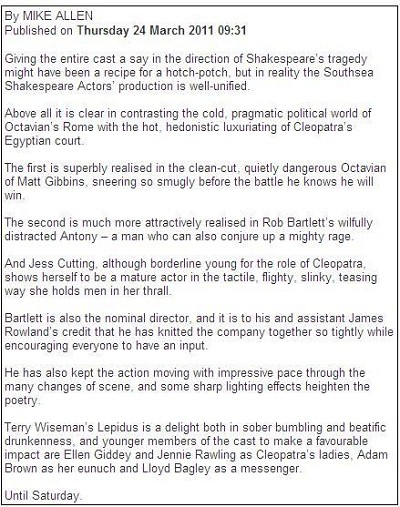 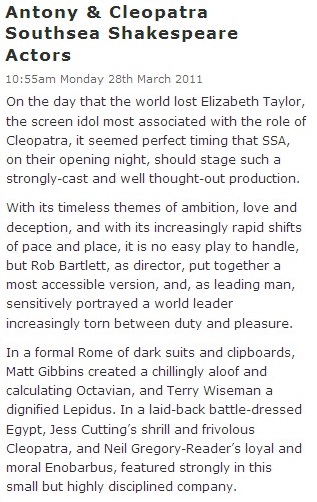 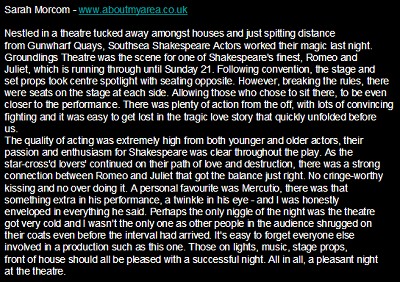 Much Ado About Nothing, November 2009 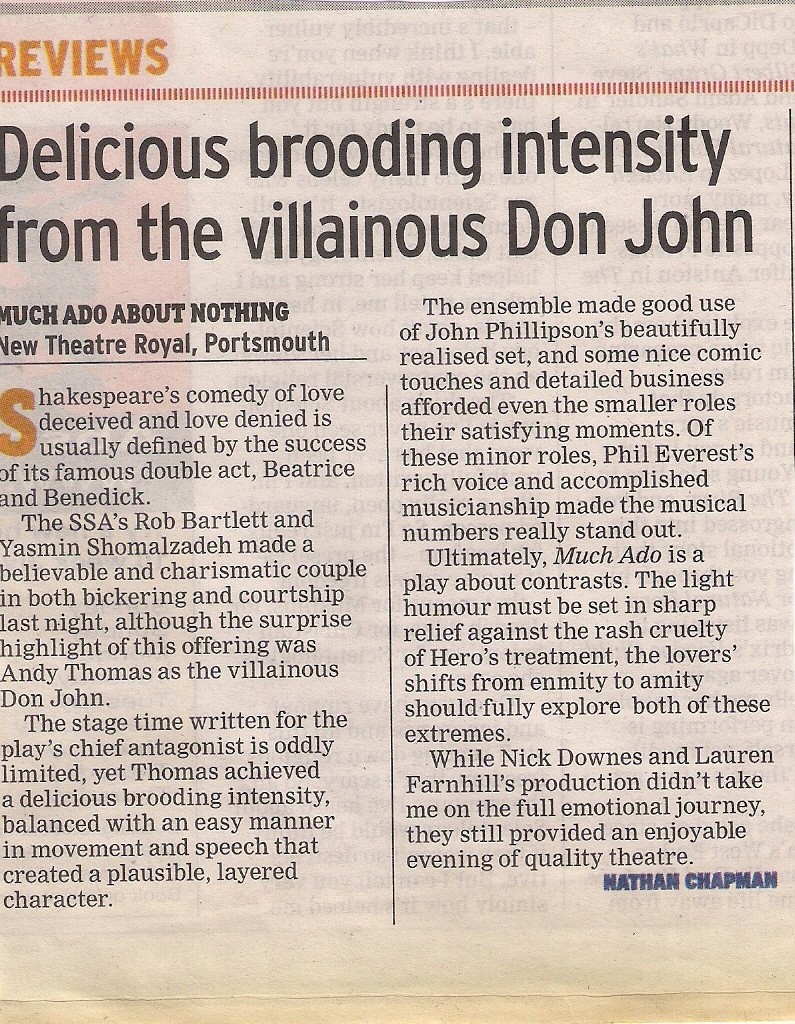 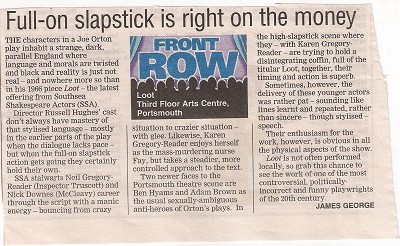 If you have any questions or would like to get in contact with us then please email:thesouthseashakespeareactors@hotmail.co.uk

The SSA is a registered charity (registration number 1013000)